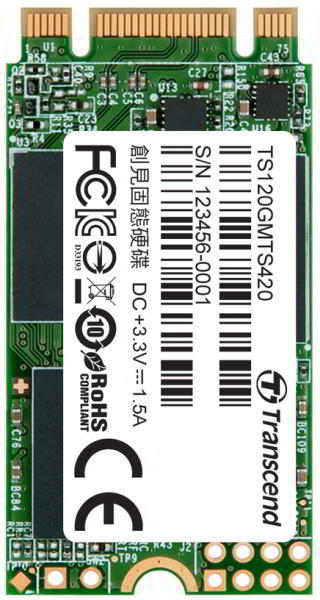 3D expansion to break through limits
Unlike the existing planar NAND chips, 3D NAND flash is a type of flash memory in which the memory cells are...
Transcend 240GB M.2 SATA3 TS240GMTS420S teljes leírás »

3D expansion to break through limits
Unlike the existing planar NAND chips, 3D NAND flash is a type of flash memory in which the memory cells are stacked vertically in multiple layers. 3D NAND is developed to break through density limitations of the 2D planar NAND, and thus can deliver a greater level of performance and endurance.

Perfect for your Ultrabook
Compliant with M. 2 form factors Type 2242 and 2280, Transcend's 3D NAND M. 2 SSDs are perfect for use in Ultrabooks and lightweight notebooks. Measured at just 42mm in length, the M. 2 SSD 420S makes for an easy upgrade to your computer, taking up little space while giving it a much needed energy boost.

Store more in less space
The M. 2 form factor enables expansion and integration of functions onto a single form factor module solution. M. 2 SSDs include a smaller form factor but with larger capacities than that of mSATA and half-slim SSDs.

Potent and feature-laden
Despite its extra-small dimensions, the M. 2 SSD 420S contains advanced features to enhance the performance of the SSD. Engineered with a RAID engine and featuring built-in SLC caching technology, it utilizes LDPC coding to correct errors and ensure data integrity.

SSD Scope software
Transcend SSD Scope is advanced, user-friendly software that makes it easy to ensure your Transcend SSD remains healthy, and continues to run fast and error-free by determining the condition and optimizing the performance of your drive.